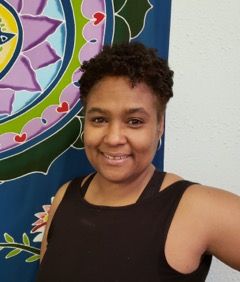 Kim began her Yoga journey later in life in an effort to get healthier and relieve stress. She took her first Yoga class in 2012, and vowed she would never attend another. But, she did. After experimenting with a variety of different Yoga styles, she found that Power Vinyasa suited her. In 2016, she begin to get serious about her yoga practice, and practiced in studios and at home at least 5 times a week. Slowly, she witnessed chronic neck, wrist and knee ailments disappear, and was enjoying a new level strength, stamina and calmness.

In 2016, she completed 200 Hour Yoga Teacher Training at Kindness Yoga Studio, in Denver, Co. She also completed a variety yoga training classes including Yoga Sequencing and Alignment, Inversions Training, and a Yoga Teacher Mentorship with Jen Hicks. In January, 2018, she began her Rocket Yoga journey and currently has 150 hours of Rocket Training with David Kyle. Rocket Yoga features postures from the Ashtanga Yoga Method with playful transitions. Kim’s classes are based in strength, power and breath, and feature playful arm balances and inversions. She loves helping her students discover their power and strength on and off the mat.